Cockroach… What a title 😉 This summer, I got an audition at the Filmakademie in Vienna – one of the better known teachers there being the great Austrian film director Michael Haneke (If you don’t know him yet, better go check him out ^^). Eventually I got cast in this project “Cockroach” and another one, “Sangre del Toro”. This post is about my experience on set of Cockroach, and the short is there too.

So, here it is, I’ve got permission to upload it on my YouTube Channel (you can find it in my “Short Film” playlist), enjoy:

Now, after you’ve seen it you might wanna hear more about it – or you’re done 😉 Either way, here is the Behind The Scenes story:

I went to an audition (normal) – I came prepared with a few simple lines for my dialogue scene. At the audition I met a few cool people who were also auditioning, and I was lucky to have such a giving scene partner. During the audition we got a lot of improvisational input, so him and me just went with everything the other gave.

A few days later I got the message that I was picked and all the information that goes along with that (when, where, what, how…). Also, the script had changed, and now it was about a couple in their bedroom – talking about cockroaches.

The day of the first rehearsal, our Director, Ani, explained to me and my “new boyfriend”, Dominik, what she saw in the scene, and we got to rehearse it on the spot and playfully got to know our characters better (-of course you do your own research at home).

Also, if you’ve already watched the short, you notice that there is someone sitting on the bed with us. If you haven’t – there is someone sitting there 😉 It is our dear friend, Ingo, who has nothing better to do than to watch us on the bed, while he wants to go out for dinner with the two of us… In the beginning the idea was to bring him in later, as a surprise, but because Ingo (as an actor, and also as a person) is way too funny to ignore, the decision to put him in from the beginning came pretty much after the first run-through. I mean, look at his face of disapproval and disgust 😀

Because the scene was set in our bedroom, in a “casual” setting (sorry, Ingo), we had to wear casual, lounge-able clothes. If you’ve ever needed a costume, or some kind of wardrobe for the stage or a film you know that H&M is pretty much the first place anyone starts – it gets the job done. 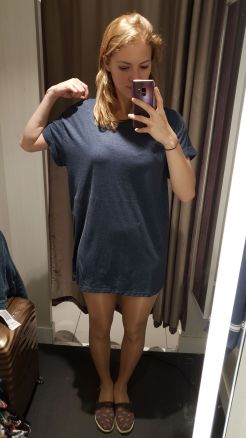 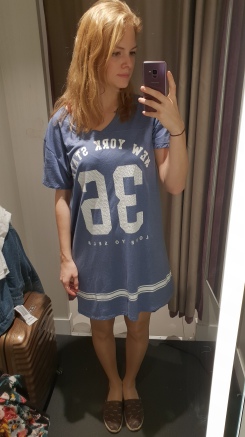 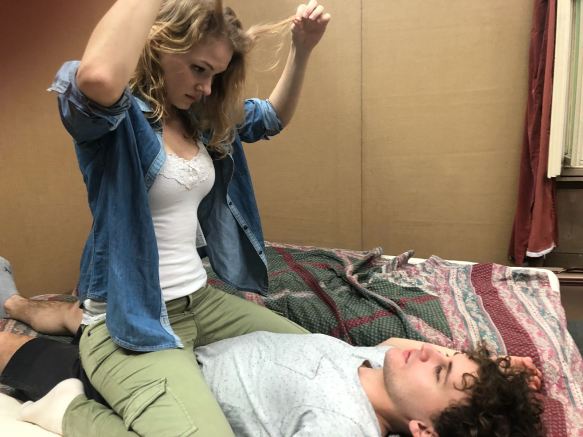 Rehearsal of the Cockroach

On the day of the shoot, the crew had set up a room that gave me kind of a New York apartment vibe – even though I’ve never been to the East Coast. I’m a big fan of dirty windows and cool lights, so I immediately felt at home. Or maybe my character felt at home, who knows – she’s the kind of person who leaves her eyeliner on over night so she doesn’t have to apply as much in the morning 😉

Another favorite part of mine was the camera set-up. We talked about all the different camera angles in rehearsal, but having a huge camera hang over your head while lying in bed is a completely different story. I love the shots from that point of view – and thanks to our sweet DP (Director of Photography, aka the girl who operates the camera), Julia, we had a monitor to help us adjust our position between every take to make sure we were in the right spot.

Glossary: An “Overhead Shot” is also called the “Bird’s – Eye View” or even the “God Shot”. The camera angle is raised/elevated to show the scene from above the subject.

We had other angles too, of course, so it meant we had to crawl off the bed whenever they had to adjust the camera over us – that just looks like an accident waiting to happen 😉

The shoot itself went very smoothly, and I think we were actually completely on time (which usually doesn’t happen on film sets). During new camera set ups, the three of us just chilled on the bed and chatted or took selfies together. It was a really relaxed set – apart from Ingo, who always stressed out about going for dinner… Just Kidding 😉

A few weeks later, Ani sent me the finished film and I finally got to see our cockroach come to life. I have to admit, I didn’t know how it would translate into black and white, but now I’m sure it wouldn’t have looked as beautiful if it was shot in color. I especially liked the pace, and the change of pace in it.

So what do you guys think? Do you prefer Black and White or Color? Are these characters you’d want to see more of? Did you even like it? 😉 Let me know below, I love feedback ❤

Hello! So how’s it going? Great? Awesome!
Anyway, you are here. Thanks for checking in. If you have any questions just comment or PM me. If you like my blog, just follow me for updates :)
– Annalena